Three Expeditions into the Interior of Eastern Australia, Complete


Natives very timid. Crater of Mount Napier or Murroa. Return to the Camp.

Stapylton's excursion to the north-west. The Shaw. Conduct the carts along the highest ground.

Again ascend Murroa and partially clear the summit. Mount Rouse. Australian Pyrenees. Swamps harder than the ground around them. Again reach the good country. Mounts Bainbrigge and Pierrepoint. Mount Sturgeon. Ascend Mount Abrupt. View of the Grampians from the summit. Victoria range and the Serra. Mud again, and a broken axle.

Stapylton examines the country before us.

MITCHELL: Three Expeditions into the Interior of Eastern Australia ()

At length get through the soft region. Cattle quite exhausted. Determine to leave them in a depot to refresh while I proceed forward. Specimens of natural history. Situation of depot camp at Lake Repose. Parting of The Widow and her child. 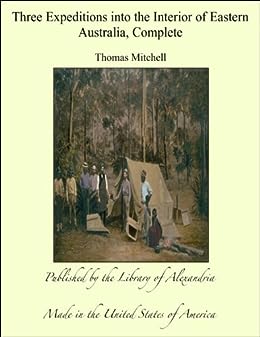 We at length emerge on much firmer ground. River Hopkins. Mount Nicholson.

The river Campaspe. Effects of a storm in the woods. Ascend Mount Macedon. Port Phillip dimly seen from it. Continue our homeward journey. Waterfall of Cobaw. Singular country on the Barnard. Cross the Campaspe.

Lot 172: MITCHELL: Three Expeditions into the Interior of Eastern Australia (1839)

An English razor found. Ascend Mount Campbell. Native beverage. Valley of the Deegay. Natives exchange baskets for axes. They linger about our camp. Effect of fireworks, etc. Arrival at, and passage of, the Goulburn. Continue through a level forest country. Ascend a height near the camp, and obtain a sight of snowy summits to the eastward. Reach a swampy river. A man drowned. Pass through Futter's range. Impeded by a swamp among reeds. Junction of the rivers Ovens and King. Ascend granitic ranges.

Cattle seen. Obliged to kill one of our working bullocks. By following the valley downwards, we arrive on the Murrumbidgee. Write my despatch. Piper meets his friends.